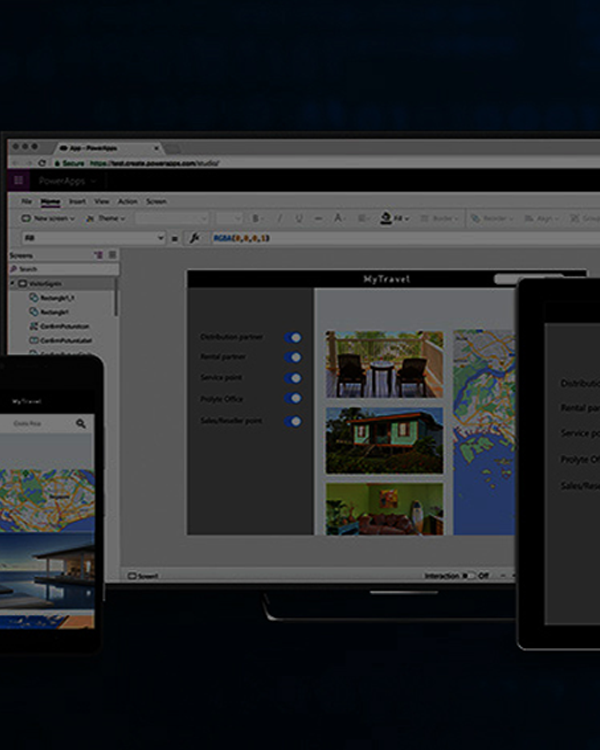 Power Apps, by Microsoft, is a service that enables the building of low or no-code applications that can be run on mobile and web platforms - especially those geared towards businesses and enterprises. There are 2 different types of apps that can be created on the Power Apps platform - “Canvas Apps” and “Model-Driven Apps”. Both these kinds of apps are managed from the Power Apps web page, and each has a different and unique design mode.

Power Apps enables “citizen developers” to build web and mobile applications with zero or minimal coding, thereby enabling anyone to turn their business ideas into high-quality, feature-rich applications that can digitally automate their business processes, resolve operational problems, and enhance the overall value of their business.

Microsoft Power Apps integrates with all other Microsoft applications such as SQL Server, SharePoint, OneDrive as well as third-party applications like Dropbox, Google Docs, SAP, and Oracle. It also comes built-in with Common Data Service, the enterprise-grade datastore on which Microsoft Dynamics 365 applications are natively built, thereby eliminating the need for additional data integration.

The Common Data Model is a secure business database implemented by Microsoft. As a service, it is referred to as the Common Data Service. This model stores your usual business entities like accounts, contacts, product information, and others. These entities, in turn, hold common fields such as addresses and phone numbers, for example. A business can take this model and extend it as required - add fields, create own entities, and so on. The basic premise is that having access to a common data model as a service allows for non-typical integrations to a host of other products and services. This Common Data Service was originally implemented as a separate database/schema service, but is now tightly coupled with Dynamics 365.

Canvas Apps - With canvas apps, the design and layout of the app can be controlled with a WYSIWYG design tool. It can be connected to different data sources (including the Common Data Service, SQL, SharePoint, Salesforce, Dropbox etc), and Excel-type formula code can also be added. You can access the app through a web user interface, or even as a mobile app.

With pre-built templates, drag-and-drop simplicity, and quick deployment, enable your team to start developing and launching apps quickly. Improvements can be rolled out as and when needed in the future.

Now everyone has the ability to build professional-grade applications with advanced functionality, including pre-built AI components - something that used to be limited only to professional developers.

Now you can provide professional developers the tools they need to seamlessly extend the application’s capabilities with Azure Functions and custom connectors to proprietary or on-premises systems.

What makes Microsoft Power Apps easy to use: Features & Capabilities

How your organization can benefit:

Web Synergies can help you maximize the performance and benefits of Microsoft Power Apps. Get in touch with us today to learn how.

Microsoft Power Automate: How it can help grow your business